Want to stay up to date with our forward-looking data insights? Sign up to Amadeus Newsbites.

Since May, there’s been a steady increase in hotel net bookings in the U.K. and Ireland. As temperatures begin to drop and days become shorter, the hospitality industry turns its attention to the autumn season. What will happen to demand as summer ends? Using Amadeus Demand360® data, we’ve analysed the U.K. and Ireland landscape, and what this tells us about bookings in the coming months. 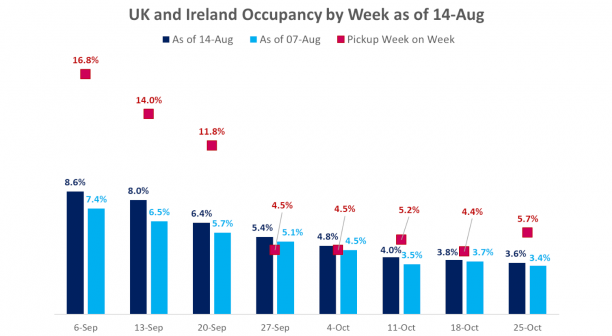 For hoteliers looking to understand demand in the coming months, the key thing to keep in mind is that the lead time has shortened. The majority of bookings are currently made in a 0-7-day window, which means that when we look outside of this, the picture suddenly becomes a lot less rosy. The good news? A decline in occupancy is common around September, even in previous years, as many come back from summer holidays and return to their daily routine. The better news? Occupancy is no longer declining between weeks, and we’re seeing double digit week-on-week growth for the start of September. In terms of location, Edinburgh and Liverpool can expect higher occupancy than the more densely populated Birmingham and London. 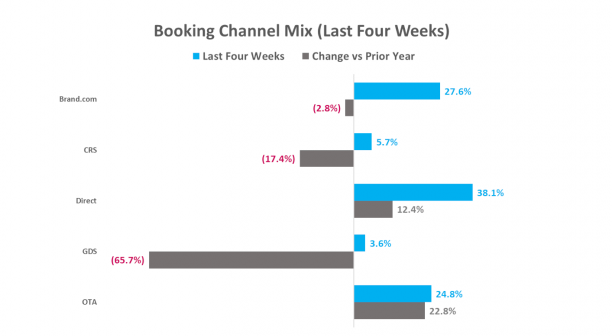 Common revenue management practices tell us that when travellers are booking last minute, they often turn to remaining inventory offered by Online Travel Agencies (OTAs). In the last four weeks, we’ve seen the share of bookings from OTAs increase dramatically compared with 2019. Although OTAs offer a wide reach, with less bookings overall, it’s important to maximise revenue by focusing on higher margin channels, such as Direct or Brand.com. Maintaining flexible cancellation policies and offering value-add incentives instead of dropping rates, are good places to start. If possible, complement this with marketing campaigns that keep these offers top of mind as potential guests seek out last minute stays.

As demand continues to fluctuate over the coming months, now is the time for hoteliers to extract insight from data to inform strategies across marketing, operations and beyond. To find more guidance visit the Amadeus Hospitality Recovery Hub.

Our Business Intelligence Solutions help hoteliers understand their market and competition, so they can make better and more informed decisions about their business.

Discover more of our dedicated UK and Ireland resources.
© 2022 Amadeus Hospitality. All rights reserved. Amadeus is the owner or the licensee of this website and all content. The website and content are protected by copyright and other intellectual property laws, treaties, and registrations globally.